Aahaar Se Arogya’  Mission to bring back millets on your plate.

Aahaar Se Arogya’  Mission to bring back millets on your plate. 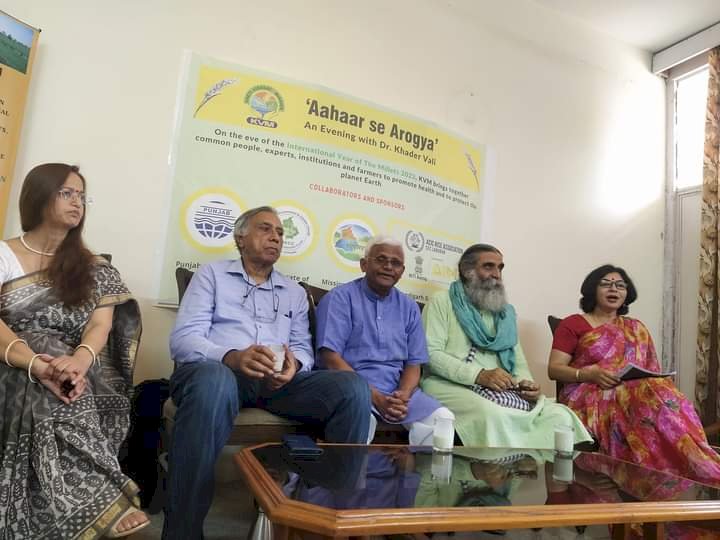 ‘ Aahaar Se Arogya’
Mission to bring back millets on your plate.
Initiating the International Year of the Millets 2023 begins

On June 20, a state level program will be organized in Faridkot under the chairmanship of *Punjab Assembly Speaker Kultar Singh Sandhwan*,

Kheti Virasat Mission (KVM) has been at the forefront of the organic farming movement in Punjab. For the past 16 years, KVM has envisioned and executed a diverse set of projects in the fields of safe food, holistic health & revival of Millets.

Recognizing the pressing need to have an alternative model of sustainable agriculture for the state of Punjab, KVM is launching its initiative to recognize and celebrate the International Year of the Millets 2023.

Speaking on the occasion, Umendra Dutt, Executive Director KVM, mentioned that the Millet cultivation goes far back in time when Wheat and Rice occupied a very small percentage of the total cultivation area. Kodra, Swank, Kangni, Kutki, Ragi, Bajra, Jowar were the prevalent crops of Punjab and Haryana. The ‘Green Revolution’ wiped out these climate smart crops and replaced them with water intensive paddy.

He also emphasized the fact that paddy cultivation has brought nothing but disaster for the state of Punjab and it is time to implement an alternate farming model, and how the cultivation of Millets provides that alternative. A climate smart drought weather crop, Millets can easily grow in Punjab’s Kharif / monsoon season. NO pesticides are required to grow these crops and they can be grown in all different types of  soils.

With this Initiative, KVM will devise and execute programs under the following three categories:
Engage, Promote and Collaborate. Providing details of this, Dutt explained how KVM will engage with civil society to make people aware about the importance of Millets. They will also build and Promote the supply chain to bring milles of Punjab in the retail market. Collaborations with the state and central governments will also be explored to implement various programs under the International Year of the Millets 2023.

Present on the occasion, Dr. Khadar Vali, also known as the Millet Man of India, named this a Miracle grain, which are recognized for their ability to nourish and heal the body. Containing large amounts of fiber, minerals and protein, these grains are a powerhouse of nutrition. Dr. Khadar also talked about a special Millets diet which can cure and manage prevalent lifestyle diseases e.g. Diabetes, Blood Sugar, Hypertension, Hyperthyroidism among others. Dr. Khadar Vali will tour Punjab giving lectures and interacting with the public, health experts,  and farmers to spread the message of adopting Millets in our diet.

Umendra Dutt, concluded by saying that the Kheti Virasat Mission firmly believes that a revival of this miracle grain will have a positive impact on the soil, health and water crisis faced by Punjab.

Dr. Amar Singh Azad said that on the principle of food is medicine, under the guidance of Dr. Khadar Wali, the Kheti Virasat Mission has been trying to make millets to Punjabis as their basic diet over the years and in this mission, efforts are being made to take all the countrymen along.
*Program outline*
On June 20, a state level program will be organized in Faridkot under the chairmanship of *Punjab Assembly Speaker Kultar Singh Sandhwan*, Millets Agriculturalists, Scientists, Doctors, Farmers, Millets Chefs will be participating .
Special Diabetes Reversal Week will be held on 21st June at Khadur Sahib and will be initiated by Dr. Khadar Wali , in this week-long camp, a residential program will be organized for Diabetes Reversal Program for diabetic patients.

It’s Rita Vs Family: Will Rita be able to convince the family to do this?

On the occasion of World Nature Conservation Day July 28,...

On the occasion of World Nature Conservation Day July 28, 2021

Early diagnosis of thyroid dysfunction need of the hour...

Early diagnosis of thyroid dysfunction need of the hour

The 'Chandigarh Horse show is being organized at New Chandigarh...

The 'Chandigarh Horse show is being organized at New Chandigarh based Equestrian...