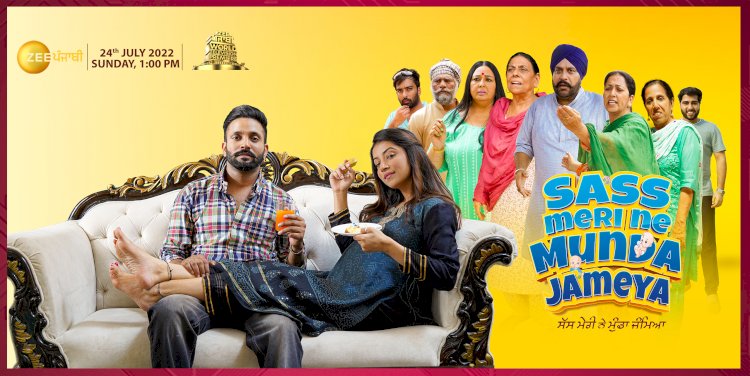 | 24th July 2022 | Zee Punjabi would be telecasting the World Television Premiere of 'Sass Meri Ne Munda Jamya'  at 1 PM today which will make your Sunday full of entertainment. Dilpreet Dhillon and Bhumika Sharma are the lead protagonists who are at the center of this light-hearted comedy-drama.

The movie is about a desi middle-class boy who falls in love with a modern girl from a rich family who further get married to each other going against everyone. Not only this, there is a dramatic twist in the story when both the daughter-in-law and the mother-in-law become pregnant at the same time. Will this journey be easy for them or will it be a matter of shame for the whole family?

Apart from that, the biggest twist awaits which will entertain everyone. To see how the film's story unfolds, don't forget to watch 'Sass Meri Ne Munda Jamya' on Zee Punjabi at 1 PM and make your Sunday fun and exciting with this World Television Premiere.

Geet loses her hand before the Dhol Competition |

Feel The Trance with the most Romantic Chart Bursters Of...

NATIONAL WEBINARS ON PROMOTING ACADEMIC INTEGRITY IN RESEARCH  AND PROFESSIONAL...

Ivy launches ‘Plant a sapling on your birthday’ initiative

Ivy launches ‘Plant a sapling on your birthday’ initiative