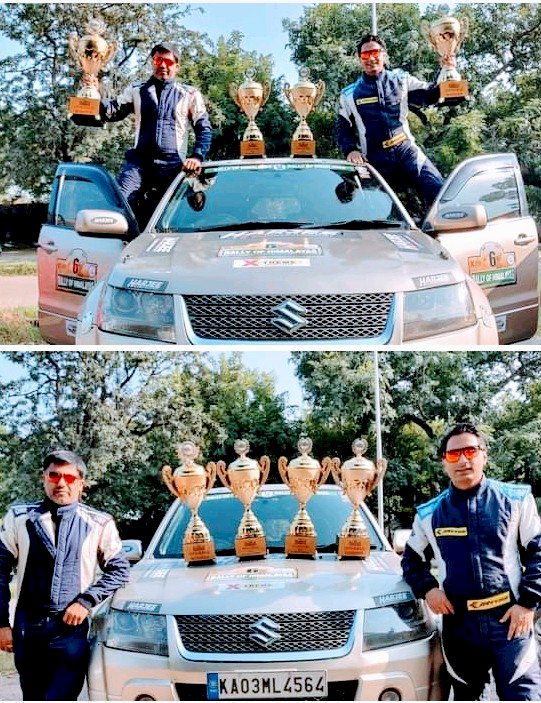 Seasoned Chandigarh rallyist Harvinder Bhola and navigator Chirag Thakur won‘Rally of Himalayas’organized by Himalayan X-Treme Motorsports club from October 7 to 10. Together they bagged the‘Overall Winner’title in the Rally of Himalayas Championship organised in Manali.  As many as 100 top rallyists from all over the country participated in this first-ever “Rally of Himalayas”.

“The rally covered most difficult terrains for racing which is the real test for the man and machine. Kaza is well known for its rough terrain challenge and the high altitude problems. Making it even more challenging was ice patch roads with tight narrow sharp turns said Harvinder Bhola. Adding more he said, Race from Manali to Kaza proved to be a survival race. With 150kmphspeed , we covered intensely rocky and rough terrain with bumpy sections.

‘Any Himalyan Rally has always been synonymous with adventure, uncertainty and extreme conditions. But this time it stepped one notch higher with the new gruelling route which challenged the abilities of rallyist’ said Chirag Thakur.

Leg-1 , the race started from Solang Valley to Hampta Pass where first 4 km comprised with the tricky hairpin tarmac and the rest of the section was bumpy and fast gravel all uphill till Hampta Pass which included narrow and sharp turns.

Leg-2 : From Manali to Kaza where villages like Chatru to Batal were the rocky rough terrain having long stretches  where car wade through some water bed and narrow sharp turns with bumpy sections at the speed of 150 kmph.

Then from Batal to Kunzum pass, it was uphill hairpins with high altitudes where all drivers felt the power issues. Known as the "black ice section", vehicles dangerously skid on the icy terrain but they managed to get hold of the situation with their expert driving skill.

Leg- 3:  Same Kaza to Manali was the reverse section where Harvinder Bhola and Chirag Thakur  drove at their best  and bagged the “Rally of Himalayas” Championship title.

Milkha Singh passes away aged 91 due to COVID-19 complications

Chandigarh’s 24x7 water supply project to be high on green...

Reduction in greenhouse gas emissions, conservation of groundwater and cutback in...

Youth regained his eye vision after a rare endovascular...

Youth regained his eye vision after a rare endovascular surgery at IIvy Hospital,...