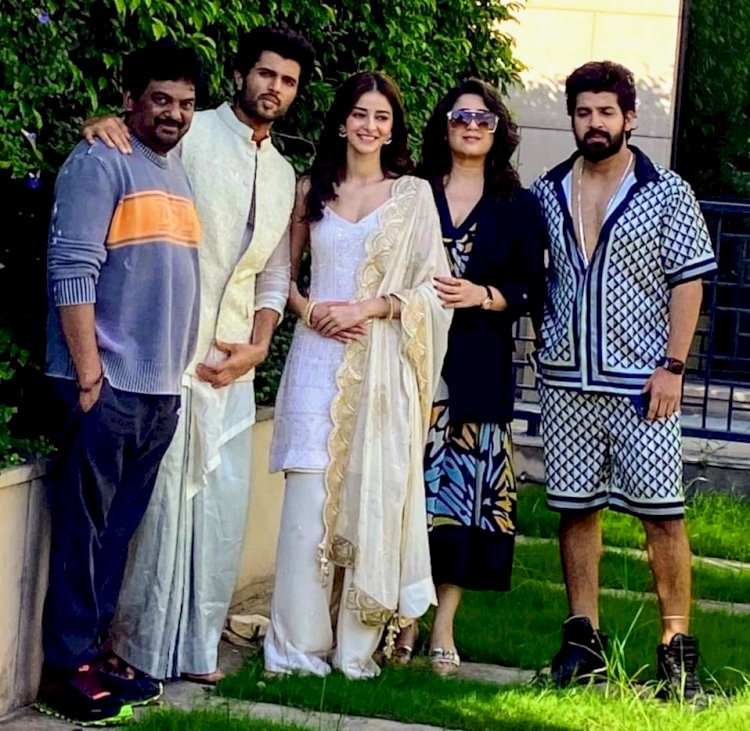 Launch of Coca 2.0 Song of the upcoming Pan India film

Chandigarh, August 12, 2022: The much-awaited pan-India film 'Liger' has been a topic of discussion among the fans and audience for a long time now. The film has been garnering a lot of headlines since the release of its trailer. South Superstar Vijay Deverakonda is going to debut in Bollywood through this film and he will be sharing the screen with Ananya Pandey. The release date is near, and the star cast is busy gaining momentum with the promotions. Recently, Director and Producer Puri Jagannath, Charmy Kaur, and Vishu Reddy, along with the actors Vijay Deverakonda and Ananya Pandey reached Chandigarh on August 12, 2022. Here, they were greeting warming by their fans and supporters and interacted with the media.

So far, three songs of this film namely, Akdi Pakdi, Waat Laga Denge, and Aafat  has been released. Now, the fourth song of the film has been released during the Chandigarh tour, titled Coca 2.0. In this song, Vijay Deverakonda and Ananya Pandey are seen in a different style.  Since the song is of Punjabi flavor, Vijay Deverakonda and Ananya Pandey are also seen in Punjabi look. Clearly,  Chandigarh was the best place to launch this song. Like all other songs of Liger, Coca 2.0 is another top hit as the music lovers cannot stop themselves from grooving to its beats.

Talking about the film, Indian film director Puri Jagannath said, "The film is based on the concept of cross-breed. Born from a combination of two different breeds, the offspring carries the powers of both breeds. And this is what the film Liger is about.”

While interacting with the media, Superstar Vijay Deverakonda said, " Liger is an action movie based on boxing. It is a powerful action thriller. There is a dialogue in the film, that is very close to my heart. It is when Liger's mother says- "Ek Lion aur Tiger ki aulad hai ye .. crossbred hai mera beta..” I am neither a lion nor a tiger. I am a liger, a mix of both. Action, entertainment, romance, thriller- the film has it all. I am sure the audience will love it.”

Talking about the new song, Ananya Pandey said, "The song Coka 2.0 is very close to my heart and the Punjabi tadka added to it makes it even more interesting. We got a great response from our Chandigarh fans. Both the song and the film will get a lot of love from the fans and the audience."

The story of Liger, directed by Puri Jagannath, revolves around a fighter. The film is produced under the banner of Karan Johar's production house Dharma Productions and Puri Connects. Vijay Deverakonda will be seen completing his journey to the MMA champion by starting boxing on the streets of Mumbai. Ramya Krishnan will be seen playing an important in the film. Along with this, kickboxing champion Mike Tyson will also be seen making a cameo in the film. The action-packed film 'Liger' will hit the big screens on August 25 in Hindi as well as in Telugu, Tamil, Kannada, and Malayalam languages.

High Decibels of Firecrackers pose an array of health risks’:...

App’ for obtaining Entry Passes( free of Cost) for Air...