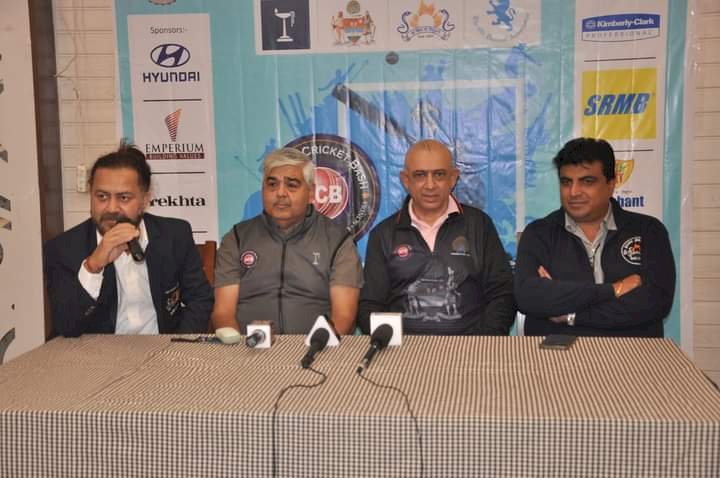 The Alumni Cricket Bash (ACB), played among the alumni of the four most reputed, historic and best known legacy Boarding Schools of India, including The Doon School, Mayo College, Daly College and Scindia School, will be played on 27th and 28th November, at a neutral venue at IVCA. The tournament is being hosted by the Scindia School Old Boys Association (SOBA). This was announced at a press meet held at Chandigarh Press Club here today.

Mitul Dikshit, North President, SOBA, said, “The Alumni Cricket Bash has become the most prestigious annual cricket tournament. The main objective is to bury the old hatchets and create new friendships and bonds.”

Banjul Badil, President, SOBA, said, “The tournament is hosted by each alumni at their respective 'alma mater' by rotation. Due to the global pandemic, this year, the Scindia School Alumni is hosting the tournament at a neutral venue in Chandigarh.”

Donny Singh, Mentor, Doon School Old Boys' Team, said, “This event is not only about the competitive cricket on the field; it also promotes goodwill, camaraderie, bonhomie and provides a great platform for networking. We have come a long way in this regard since its beginning in 2014.”

Two players will be above 50 years, 4 below 30 years and 5 players will be between 30-50 years of age. Each team will play the other in 2 days of competitive cricket action.

Vir Vikram Yadav, Captain, Mayo College, Ajmer's Old Boys' Team, said, “A number of prominent alums, board of governors and dignitaries from all four schools will participate in this much awaited annual event. It is the highlight of the sporting calendar of all four alumni.”

Tejvir Juneja, Captain, Daly College Indore's Old Boys' Team, said, “We are happy that all the four legacy boarding schools of India - The Doon School, Mayo College, Daly College and Scindia School, are holding the tournament. This is a memorable event for all of us old friends.”

All the four historic boarding schools, which are heaven for all round education, lay heavy emphasis on sports, as against other schools where academic goals are single point agendas. The ACB is all about keeping enhancing fellowship between schools with a similar history and background- through the common and extremely popular medium of cricket. However, it also reflects the intense traditional rivalry of the schools involved. The Alumni bodies of all schools are deeply involved and have sanctioned the ACB to be the definitive Alumni cricket event in the annual calendar.

Two players will be above 50 years

Man with renal failure, Hepatitis B, C and HIV gets a new...

Man with renal failure, Hepatitis B, C and HIV gets a new lease of life at IVY Hospital,...

Plantation of Sacred and Healing Herbs Organised by SGGS...

flagging off of 20 HVAC Buses and 40 Electric Buses at...