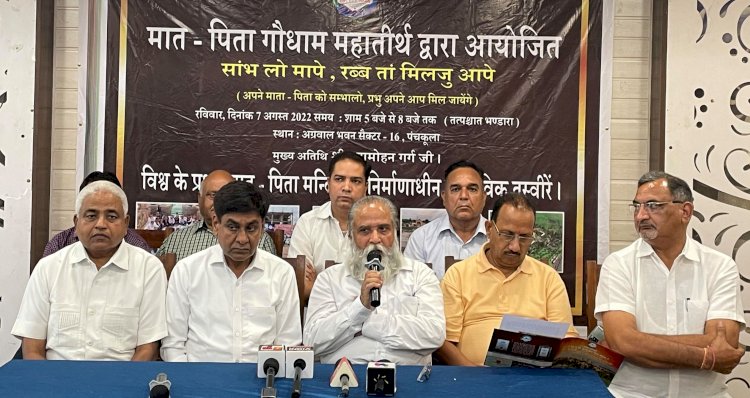 World's first & only temple dedicated to parents at Mohali will be ready by 2025
Chandigarh, August 5: The construction work of world's first and only
‘Maat-Pitaa Mandir’ is going on in full swing and by the year 2025, it will be
fully ready. The temple is being built by Maat Pitaa Gaudham Trust
(MPGD), an NGO at village Khallaur on Banur-Ambala road in Mohali
district.
Speaking during a press conference here on Friday, Gyan Chand Walia,
founder of Trust said that in just 8 months, the first laying of roof slab (
lanter) of the basement of 20 thousand square feet has been completed
and the work is going on very fast.
Walia said that this temple will be dedicated to the parents. He further said
that the temple would not have any idol as the devotees would feel the
presence of God in their parents.
The objective of the temple would also be to focus on the spiritual benefits
of the mother cow while spreading awareness about respecting parents as well, he asserted.
'Maat Pitaa Mandir' which is for all communities and religions will be
completely dedicated to the parents where they will be worshiped and respected, he informed.
Meanwhile, the temple has also got a certificate from the World Book of
Records as the world's first and only 'Maat Pita Mandir'.
Meanwhile, the Trust is also organizing a program ' Sambh lu maape, rab
milju aape' on August 7 at Aggrawal Bhawan, Panchkula.

Kid with large hole in his heart gets a new lease of life...

11 yr boy with a mass under tongue treated successfully...

Research on GRAD system based on Ayurvedic principles offers...